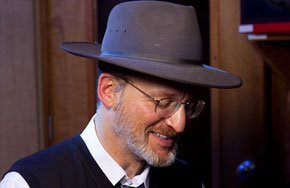 Bronx-born and New York native David Gurwitz has had a diverse history, from semi-pro basketball to financial expert on market cycles. Through it all, music has always been a passion.

“Basketball was my sport, growing up and in school. I practiced dribbling the ball every day for many years,” says Gurwitz.  “Believe it or not, that same motion, and constant repetition, lent itself perfectly to playing the piano.”

Although this is his first album – entitled “Never Give Up Hope” – David has been composing, recording and performing on the piano for live audiences, including charitable organizations, for many years. His music has generated a worldwide following, ranging from kids to adults, across all ethnic lines. What makes it so unusual is that David was born in 1955, making him an inspiration to Baby Boomers who often feel that they don’t have the ability or discipline to pursue their “encore careers.”

David began to develop his musical talent when he discovered, years after his mother had died tragically, that she had performed in Carnegie Hall in the 1930s.

What also makes David unique – besides his music – is that he began playing piano for the first time in college, not knowing that he had a hidden talent until he first sat down to play at 19 years old after learning in an advanced mathematics course that music and math were greatly connected. He also can’t read a note – he does everything by ear.

These songs, produced by Brian Koonin, a popular New York musician who has performed in many Broadway shows and studio sessions with numerous artists, incorporate both multiple instruments and piano solos.

Besides playing the piano or composing, David is the Managing Director of the Charles Nenner Research Center, an international firm that provides financial research and analysis for institutions, investors and traders.  David is a sought after speaker, and makes regular media appearances around the world.

In 2009, David performed a concert for Special Olympics Connecticut and dedicated a song to the athletes, “Hear the Children,” which evoked an emotional response from fans worldwide, with comments such as “relaxing, peaceful, elevating, refreshing, and uplifting.”

David has two graduate degrees: a J.D. from Boston College Law School and an MBA from New York University. He is also a Certified Public Accountant.

To arrange an interview regarding his career or music, or a concert, please call the contact above.

To learn more about David, his music, and the many people he has touched, please visit www.DavidGurwitz.com.