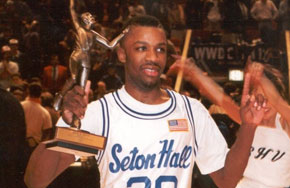 Oliver Taylor (20) is carried off the floor after sinking the winning lay-up with one second left giving No. 21 Seton Hall a 70-69 victory over Pittsburgh in the quarterfinals of the Big East Tournament at Madison Square Garden, Friday, March 8, 1991, New York. (AP Photo/Bill Kostroun)

When they talk about that Big East Tournament now, the hero and his mentor can’t help but reflect on the victories on the court. They’ll remember how an unheralded player named Oliver Taylor helped Seton Hall  stun Georgetown and Villanova and the rest to win the title.

Taylor was the MVP in Madison Square Garden exactly 25 years ago today, and now that he is long retired from the sport he loves, he knows that stands as the signature accomplishment of his athletic career . He’ll be forever linked with the likes of Patrick Ewing, Chris Mullin and Sherman Douglas.

But that is rarely the focus of the conversations when the hero and his mentor touch base. They are far more likely to reflect on the unique nature of their relationship, and how their special bond has helped impact the lives of countless young people in the years that followed.

That is the legacy of one phone call almost 30 years ago. David Gurwitz, a well-to-do businessman who grew up a basketball junkie himself in the South Bronx, had read a newspaper story about how Taylor had all the talent in the world but couldn’t get the basic score on his SATs.

He called Far Rockaway High School, where Taylor was a hoops star averaging

35 points a game, and made an offer: Let me mentor the kid. Let me tutor him and spend some time with him away from the court.

He taught him algebra and geometry, helped build his vocabulary and sat with him as he read newspaper articles out loud. He showed him how to open a bank account and showed him a world of restaurants and food choices beyond the junk that comes in a paper bag. Mark Kriegel, then the brilliant New York Post columnist, told their story after Taylor took over the Garden.

“For me, I don’t think back 25 years ago and remember how he shot over Alonzo Mourning,” said Gurwitz, who is also a concert pianist. “Okay, that was awesome. But it wasn’t so much that he won the MVP, because I knew he had talent. I just knew what kind of person he was becoming.”

Oliver Taylor is now a deputy sheriff in the Atlanta suburbs, spending most of his days at Salem High School as a presence to deter gangs and crime, but really, as a positive role model who uses his own experiences to shape the lives of the young people he encounter.

The hero has become the mentor, a twist that makes the story even more gratifying for Gurwitz.

“I’m around kids all day, from middle school to high school, and it’s almost like I was being trained to be in that position,” Taylor said.

“It was difficult for me because where I grew up, there wasn’t anybody in front of me from my neighborhood who went to a big college. I challenge these kids now: When you got off to college, come back and tell you story to the kids behind you. Make an impact on your community.”

It was Gurwitz who made that impact on his life. Taylor went from the Far Rockaway neighbor of Queens, then spent two years at Miami-Dade junior college, and with Gurwitz’s help, landed at Seton Hall just after the Pirates’ brilliant run to the 1989 championship game.

He was a role player for the Pirates for two seasons, which was often a source of frustration from the mentor as he watched games at the Meadowlands. “I blew it,” Gurwitz said. “I should have had P.J. (Carlesimo) sign that Oliver would get no less than 15 shots a game!”

That made what happen next, during his final Big East Tournament, so unexpected. He scored 50 points in three games, winning two of them, against Pittsburgh and Villanova, on last-second shots.

It was the first Big East title for Seton Hall, and Taylor will watch from afar this week to see if the Pirates can win just their third with, perhaps, another surprise performance. Gurwitz will watch, too.

But the two are more interested in meeting again in a few weeks when Taylor travels to New York. They want to find a way to share their story from a quarter century ago with others, in hopes that even a few people will make a phone call like Gurwitz did and open up his life to a young person who needs an assist.

The hero and the mentor don’t consider what happened in the Garden 25 years ago to be the important part of their story. That part, they say, is still unfolding in the lives they impact.