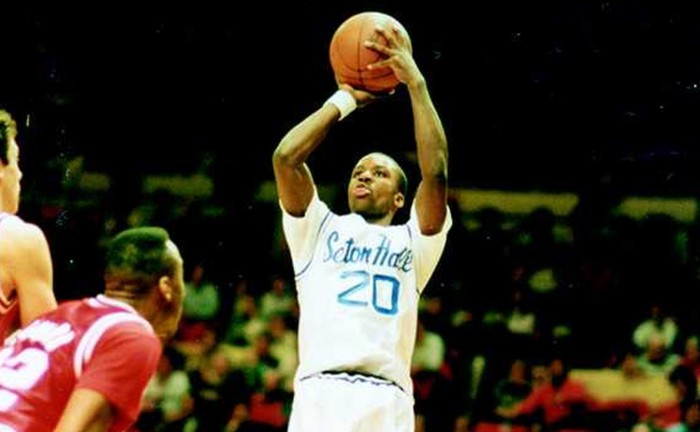 Sean Saint Jacques tells the extraordinary story of former Seton Hall basketball star Oliver Taylor and the mentor that changed his life forever. This is the first part of a three part series.

Part I: Meeting a Mentor and the journey to Seton Hall

Oliver Taylor was considered one of the best young basketball players in the five boroughs during his high school days. The sky was the limit and all he had to do was choose the right college to play basketball, but an obstacle would arise. Taylor did not have the grades.

At Far Rockaway High School, Taylor was a star and averaged 35 points per game. He did not need too much help on the court to show everyone how good he was, but in the classroom it was different. Taylor struggled to get good grades and meet the standards on SAT scores, which meant schools like local St. John’s would not accept Taylor into their program due to his low test scores. With his dream of playing Division I basketball was in jeopardy, Taylor kept working hard.

Taylor was raised by a single mother who worked three jobs in order to take care of the family, but was still able to chase his dream with his entire family behind him.

“I did have my stepfather and he worked a lot,” Taylor said. My mom was the glue. It was not about rich and poor. With my two brothers and three sisters, I just enjoyed living as a kid. My mom worked around the clock and we focused on education.”

With struggles in the classroom and a tough decision on what to do next looming for the high school star, the papers took notice. An article was written about Taylor’s high school career in the New York Times during the 1987 season. Taylor’s story was published and an accomplished business man and lifetime lover of basketball happened to pick it up.

In some ways, David Gurwitz came from a much different background than Taylor. Gurwitz was raised in a religious family of rabbis and had already been successful in many of his endeavors. However, Gurwitz knew what it was like growing up without money and, more importantly, knew how vital it was to help others. So with Gurwitz holding the Taylor article in one hand and clutching his recently born son in the other, he knew what he had to do.

“I said that I had to help him,” Gurwitz said. Gurwitz decided to make a simple phone call to Taylor’s high school in Queens. One that would change the lives of many people in the process. “I called and offered to tutor him,” Gurwitz said. “When we met he sat down and I gave him the baby to hold. He was mild mannered.”

“I know you can shoot, but can you read this?” Gurwitz said to Taylor. “I didn’t like the way he read it and I told him how to read. I made him write five words, five sentences, five minutes. I would drill him.”

Gurwitz tutored Taylor on how to read and write, in addition to vocabulary and different forms of math. For Gurwitz, it was the least that he could do. After all, he had been mentored by plenty of people to get where he was including one of the greatest minds in the history of basketball, Red Auerbach.

“He was the best talent scout,” Gurwitz said. “To recognize talent and I believe that I learned it from him. He went from the Russell years to the Cowen years to the Bird years. He taught me a lot about situational viewpoint. So much of life is how you view your situation. Red understood all of the stuff.”

Gurwitz met Auerbach at a hotel while working as a bellhop at the Kutcher’s Hotel near Monticello, N.Y. The Celtic coach would always go up for the Maurice Stokes Game, which was a charity basketball game that would attract basketball’s best. Every year that Auerbach came to the hotel, Gurwitz would pick his brain. The legend had no problem discussing his team and the game of basketball with a bellhop.

“He was a big tennis guy, he would sit there in his big white tennis shorts smoking his cigar,” Gurwitz said. “He was not arrogant at all, he talked to the bellhops, pool guys and old ladies. He was the point guard of life. [Larry] Bird had a photographic memory of where things were. Red had that also and the ability to psych up players and get them ready to play.”

Those experiences in particular have stuck with Gurwitz. Certainly, some of the cigar smoke and wisdom from Auerbach as well.

“To this day, when I deal with people I look for talent to see if people will be good at this in three months or six months and then they are,” Gurwitz said. “Red was great at looking under the surface. It is easy to get caught up in the mindset of the moment and not just three years from now.”

All those years later, when it came time for Taylor to choose school to start his collegiate career Gurwitz was right by Taylor’s side. The decision was for Taylor to attend Miami-Dade Community College to play basketball and work on his academics.

“My mother just bought a house down by Miami-Dade Community College,” Taylor said. “I was living in an apartment off-campus and commuting. It was tough getting to know people.”

Taylor, who was considered one of the best shooters in high school, had no issues on the court and picked up right where he left off in Queens.

“We were 28-1 the first year. We had great players and great people,” Taylor said. “We were more focused on the task. The goal was to make to a big time college.” By the time Taylor was finished with community college, major college programs were very interested in recruiting him. The primer shooter seemed destined to go to the Big East conference.

“My junior college coach said I was going to the Big East,” Taylor said. “I skipped school once to watch Pearl Washington and Lou Carnesecca come to Far Rock High School. That was first time I saw someone and touched someone who was on television.”

And as fate would have it, his hometown conference that played at Taylor’s dream venue would come calling.

“I looked at my top 5 colleges. I knew I had Maryland and Syracuse come very late. Seton Hall was there for my first two years,” Taylor said. “Maryland fell off the table and they were under investigations for players. Syracuse didn’t put in the effort and I needed to go somewhere where I would play. Seton Hall had just gone to the National Championship. I was like ‘wow I was going to Seton Hall.’”

Seton Hall was perfect for Taylor. It was close to home, he received a full scholarship, his mother could see him play and Madison Square Garden beckoned. Even academically Taylor felt a little bit more comfortable, especially after he and Gurwitz talked with Robin Cunningham from the education program about the schooling Taylor would have in South Orange.

“I met Cunningham and I was impressed with her because of how much she cared,” Gurwitz said. “Robin had [Taylor] work and now he has two degrees and they really worked him. I was very impressed. The school had an amazing focus on education for athletes.”

As Taylor began to find his way in the classroom, challenges started to arise on the court. Seton Hall head coach P. J. Carlesimo had great scorers already on his team with Terry Dehere and Anthony Avent who would carry The Hall. Taylor, who was used to being the go-to player on the offensive end, had to adjust to being a role player.

“I have two takes of it. It was tough. A kid comes from New York City and they put the ball in my hand and let me do what I want to do,” Taylor said. “I am going to play the point guard. The coach wants the system to be run. I was confused for the first time in my entire career. I am thinking too much instead of playing the game and not understanding what P.J.’s philosophy was. My first year it was very tough for me. I had to look at film for the entire summer and what P.J. wanted.”

Be on the lookout for PART II: Taylor shines at Madison Square Garden, then goes prowhich is coming out tomorrow!