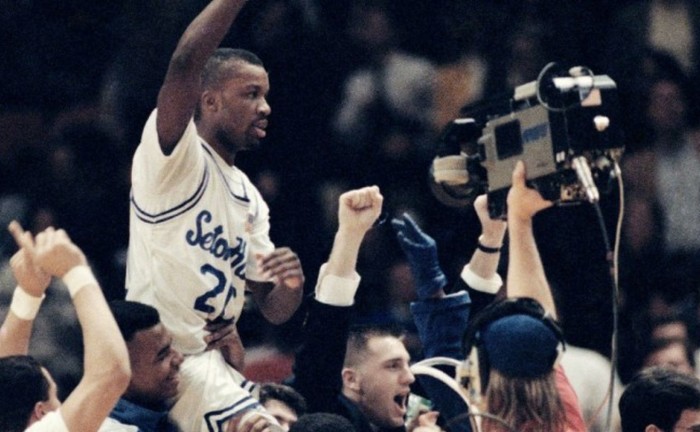 This is part two of the Oliver Taylor story as told by Sean Saint Jacques. If you missed part one yesterday, you can read it right HERE.

Gurwitz was not a fan of Carlesimo’s philosophy when it came to using Taylor on the floor during his time in South Orange. It never seemed like Taylor got enough shots during games and Gurwitz would speak to Carlesimo about it.

“P.J. why don’t you play a game of horse and see who wins?” Gurwitz said. “He was not the star, but he had to do his work. It was an unplanned experienced.”

Taylor would also hurt his ankle during the Pirates’ struggles that first year in South Orange, but as he had so many times before the guard rose up.

“One thing about the Big East, you don’t have time to heal you have to play through injuries,” Taylor said. “[Carlesimo] helped me to become the player and person I was today.”

Seton Hall had bounce back season in 1990-91 with a 25-9 record after finishing four games below .500 the year before. The Pirates finished fourth in the conference with a 9-7 Big East record and got set for the Madison Square Garden. Like many young teams adjusting the in the conference, dealing with the physicality was the key to finally putting a good season together. Now, Taylor and the Pirates got set to face Pittsburgh in the opening game at MSG.

The Hall had lost to Pittsburgh on the road by six earlier that season, but had other ideas in the tournament. With Seton Hall trailing 69-68 in the final seconds, Taylor had the ball with a chance to win it.

“When I had the ball, I remember PJ said to run a normal play. Gordon would find Terry,” Taylor said. “Time is running, but it was moving slowly in my head. Avent cut off his guy in the play. I personally felt that guy couldn’t stay in front of me. As I penetrate, I went up in the air to make the shot as time expired. It gave us another day to play.”

The next day, Seton Hall would play Villanova in the semifinals with a chance to play in their first conference tournament final in school history. Taylor would be called on again by the Pirates at the Mecca. This time the Pirates and Wildcats were tied at 72 in the final seconds. The ball was placed in the hands of the Queens native once again.

“It was about giving us a chance to win the game. I was shooting the ball really well,” Taylor said. “It was up to me to do something. I was like in high school. When it came down to the last shot I hit a shot from the corner, they came down to tie it. We get the ball back and we get the last shot. [Carlesimo] puts 1-4, everyone ran to the baseline and cleared it out for me. If we score, we win. If I don’t we go to overtime. I didn’t want to give them the opportunity.”

Taylor took his shot, made it and sent the Pirates to the title game where they met Georgetown. Despite having to face two future NBA Hall of Famers in Alonzo Mourning and Dikembe Mutombo, the Pirates would go on to win 72-64 in the championship game. Seton Hall had clinched its first conference title ever and Taylor was named the tournament MVP—a dream come true to say the least.

“It was an awesome feeling. As a kid from Rockaway, people probably doubted me my whole life,” Taylor said. “Having the opportunity to play at MSG and for one night for that weekend to feel like you were the best player in the world. I picked up every paper and my face was on it. To walk away with the MVP trophy it was almost a dream.”

To this day, Taylor still has the trophy and will never give it up. “It was the heaviest trophy that I ever had. That is a trophy that I still have now,” Taylor said. “You can’t take that away that is history by itself. You look at the players in that tournament. For that one weekend, it was your time.”

Gurwitz, who had been with Taylor through thick and thin, could not go the game in person, but did watch every last second of it.

“In the championship game, I was in Phoenix and watched the game in a bar and was crying obviously. Tears of joy,” Gurwitz said. “I knew so much more underneath what people were watching. It was momentous. I was so happy for Oliver. I felt it was the culmination of kid that overcame things that were unplanned. He didn’t have a father, he went to Florida, he didn’t get to shoot. He lived with a lot of frustrations that others might not have taken in stride. The fact that he did the other stuff around it, to me that is the lesson. When a person perseveres there is so much around it.”

Taylor and the Pirates made a deep run to the Elite Eight of the NCAA Tournament, but would fall to UNLV in the Regional Final. That would end Taylor’s college career, but a professional one was on the horizon. For Taylor, his first stop was in Chicago to try out for the Bulls.

“It was a great experience. I felt that I played really well. I played my game,” Taylor said. “The lifestyle was different from college. I go overseas and I winded up liking it over there.”

Taylor credits his college career to the success he had overseas. That time at Seton Hall helped him to have a successful time away from home, but first Taylor would finish his degree in school. When that was complete, he played in countries such as Puerto Rico, France, Germany, Israel and others.

“The best thing with France was that I was with one team,” Taylor said. “People couldn’t speak my language. It was tough the first few days, but it was a great experience. I led the league in assists and worked on my game and I did very well.”

However, while he was overseas, Taylor would lose touch with his mentor. Gurwitz and Taylor would not talk for years, but did have success in their respective professions. Taylor with basketball and Gurwitz with music. As a matter of fact, if it was not for Gurwitz’s music they would have never been able to reconnect.

“I was all over the place and had gone down to Georgia,” Taylor said. “My brother said ‘you remember David? He is doing music.’ I said ‘David?’ It caught me off guard.”

Taylor’s brother had found Gurwitz through his website, but that almost didn’t happen. During my conversation with them Gurwitz told myself and Taylor a story he had never shared before.

“The day [Taylor] called me, my site had been down and then came back up when he found it. I never told you that,” Gurwitz said to Taylor. “God made sure he was looking at that time. I now play concerts for Special Olympics and Texas hospitals play my music before kids go into surgery.”

After nearly three decades, Gurwitz and Taylor reunited. It was a phone call that began their friendship and the Internet that brought it back together. Times and technology may have changed, but that bond lasts forever.

“I look at him as a brother. It is like a long lost brother coming back into your life,” Gurwitz said. “He was away a lot in Europe. God was good to us and brought us back together again.”

Taylor and Gurwitz began to catch up to see what each other had been up to. Gurwitz, a successful business man, continued to be a man of many talents. He had written books, grown his music and has been on television sharing his knowledge of investing. Despite all of that, he points to the man that Taylor has become more than the success he has enjoyed in his life.

The finale of this series: Part III: The mentee becomes the mentor will be released tomorrow!