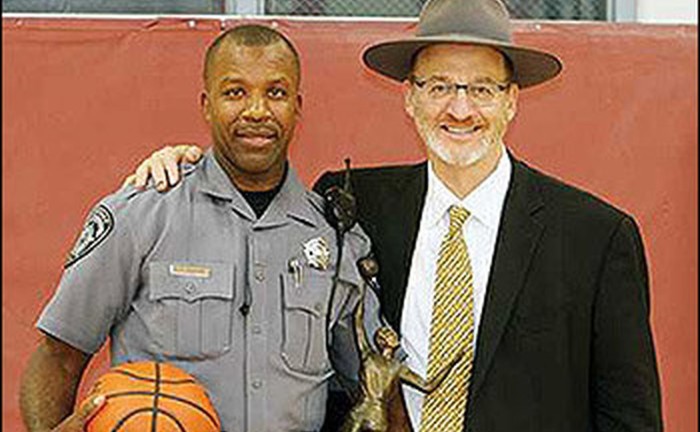 The conclusion of the Oliver Taylor story as told by Sean Saint Jacques. Oliver and David discuss what they are up to now and how they continue to grow every day.

In suburbs of Atlanta, Taylor is a deputy sheriff and helps kids at Salem High School to stay away from gangs. Taylor is a research officer at the school and mentors 1,400 kids.

“Some kids don’t have fathers and they all have kind hearts. I have to reach kids from different angles,” Taylor said. “I got guys like David [Gurwitz] who took a chance on me and 30 years later I am on the phone talking with the same guy and he is not African American. No matter what you do someone is going to be there to help you as long as you work hard.”

Taylor’s days on the job are not easy whatsoever and he has had to deal with plenty of difficult situations with many of the kids he looks after. Taylor talked about the typical day as a law enforcer. It is extremely challenging, but Taylor enjoys the tough tasks that he is faced with each day.

“I look at it in two different ways, especially when you are looking at someone who passed away. You have to make a split second decision,” Taylor said. “Someone comes around the corner and you have to make a decision and take action. I have to look at all the evidence. I have to put myself in that position. The biggest weapon is being quiet. The way you treat people is how they will treat you. You have to conduct yourself with respect. For me, it is not about publicity. It is about making an impact. How would you handle it if it was someone in your family? Don’t scrutinize a cop. When they put the facts out, people understand why they made that decision. It is tough and the positives outweigh the negatives. I love my job. When I say ;lock them up,’ it is me enforcing the law because of a decision.”

One case in particular stands out to Taylor and Gurwitz. A girl named Tatiana had become attached to Taylor, so much so that she would only open up to him about her problems at home. Taylor was able to look out for her and it was a good thing that he had. Tatiana would not have survived without him.

“I was in a middle school and I deal with a lot of kids. I give kids a different perspective on law enforcement,” Taylor said. “I shake hands and give hugs to the young kids, but I have a job to do and they understand that. This girl was going from foster home to foster home. I told her to talk with me. She ran away to an apartment from that location. She slept outside. The only person she could contact and trust was me. She wanted to go back to the family and went home. I told her that if she was going to run away to take my number. She put the number in her phone by her battery. She ran away and I had to drive and get her. I’m sitting in the car and the school called me. I had two missed calls and a text saying to come get me. It would not be enough time to go get her. I finally got the home number, called the house and the young lady was down stairs. She said she was fine. Mom said it was fine. I sent a deputy over to the house to check in on her. I had him check it out and to contact me directly to make sure that she was okay. He told me that she was alright. Within three minutes, the call got updated to her trying to commit suicide. She had a rope wrapped around her neck. We took her to the hospital. I took it hard the entire night. I thought what would have happened if I just said ‘I’ll wait to tomorrow.’ She called me again. She said she would never ever do that again to herself. She is just 15 years old. She is just one of many.”

Taylor has come a long way from his days studying with Gurwitz for the SATs in Far Rockaway. The mentorship seems to have come full circle and now, in many ways, the student is now a hero to the teacher.

“It has been 29 years since I first called him. I have watched him grow in many situations. He has starred into a role of helping hero,” Gurwitz said. “He continues to help people, he is a star just not at MSG. He is a much bigger hero now, but nobody knows about it. If I helped with it at all, I would be very grateful.”

Gurwitz now calls Taylor his “hero” and even got to see the man he considers a brother at work down in Georgia.

“When I went down to the school and saw all of the kids, how they dealt with him and all of the love they had for him,” Gurwitz said. “It was amazing to see what he has become 40 miles outside of Atlanta. The reconnect has given me an even greater satisfaction. He now believes that he has been trained to do this. I have even greater happiness for him and the people that are gaining from him. He wants to become a better deputy sheriff every day. He still doing it like he is improving his jump shot. He is approachable and nurtures those kids and coaches them. It is unbelievable.”

Taylor is extremely grateful for the journey he has gone on and the fact that he was able to pay it forward just like his mentor did makes it all the more sweeter.

“In my heart, it feels good,” Taylor said. “But it is me living out what they said to me and passing it on to the next generation.”

Taylor is now 47 years old and still lives in Georgia trying to influence others to take the path that he did to success. Another person Taylor has mentored is his nephew Kurt Taylor Jr. who is a star high school running back. Back in October of 2015, Taylor Jr. committed to play football at the University of Michigan for head coach Jim Harbaugh. His uncle expects big things from another talented athlete in the family.

“If you talk to him, he does what he is supposed to do,” Taylor said. “He will be successful in whatever he does. He looks up to us. The best way to be successful is to follow someone who is successful, like I followed Dave [Gurwitz].”

Taylor and Gurwitz still talk to this day. They plan to stay in touch with each other and continue to pass on that spirit of helping to others.

It is so important to help the ones that need it, especially in today’s society with so many people that continue to need it. Even as we age, it does not hurt to reach out and try to help. As Gurwitz puts it, “why stop getting better when you are 60?”

Thank you for reading this part and the entire Oliver Taylor story. Make sure to read parts I and II as well!